Even after dying countless times, Subaru finally ended the threat of the White Whale and defeated the Witch Cult's Sin Archbishop representing sloth, Petelgeuse Romaneeconti. But only shortly after overcoming a tragic ending and reuniting with his beloved Emilia, Subaru learns that Rem has been erased from this world, having fallen victim to the White Whale's Fog of Elimination in the midst of Subaru's death loop. With the White Whale now gone, Subaru and Emilia are forced to confront a reality they never dreamed would happen. (Source: Crunchyroll)

the, subaru, white, whale, and, emilia, after, with

Re:ZERO -Starting Life in Another World-

When Subaru Natsuki leaves the convenience store, the last thing he expects is to be wrenched from his everyday life and dropped into a fantasy world. Things aren't looking good for the bewildered teenager; however, not long after his arrival, he is attacked by some thugs. Armed with only a bag of groceries and a now useless cell phone, he is quickly beaten to a pulp. Fortunately, a mysterious beauty named Satella, in hot pursuit after the one who stole her insignia, happens upon Subaru and saves him. In order to thank the honest and kindhearted girl, Subaru offers to help in her search, and later that night, he even finds the whereabouts of that which she seeks. But unbeknownst to them, a much darker force stalks the pair from the shadows, and just minutes after locating the insignia, Subaru and Satella are brutally murdered. However, Subaru immediately reawakens to a familiar scene—confronted by the same group of thugs, meeting Satella all over again—the enigma deepens as history inexplicably repeats itself. [Written by MAL Rewrite] 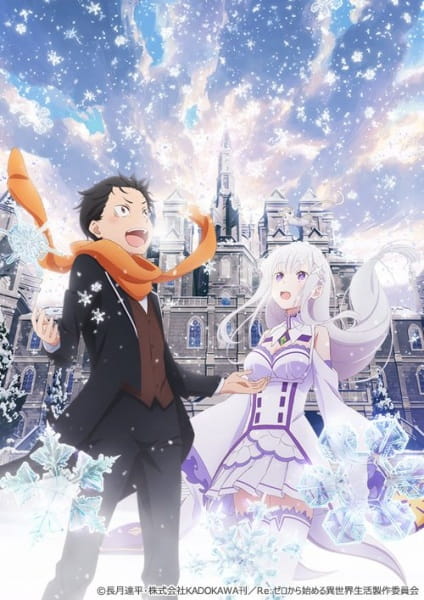 Subaru Natsuki finally gets to take a breather, but he does not waste any time as he prepares for a date with his beloved Emilia. He scouts the nearby village for the right dating spot, and with the help of the village children, he finds a wonderful location. With that, he is well prepared for his date! Unfortunately for Subaru, cold weather suddenly sweeps across Roswaal's mansion on his important day, leaving him with no choice but to postpone the date. Overnight, it becomes even colder and unbearable. Subaru must get to the bottom of this because, at this rate, his date will be the least of his worries. [Written by MAL Rewrite]

Covered in ice and snow, Elior Forest is the home to dangerous magical beasts and 50 elves frozen in ice. One day, the great spirit Pack helps a young girl break out of her ice prison. Her name is Emilia, a half-elf born with silver hair, long ears, and amethyst eyes—features that resemble the evil Witch who destroyed half the world long ago. Shunned by society because of her appearance, Emilia dwells in the forest with Pack as her sole companion and family. Burdened with a sin of destruction she does not remember committing, she spends her days trying to find a way to help her frozen kin. But when the great spirit Melakuera, the Arbitrator of the world, finds Emilia, her right to stay alive is brought into question. Will the bonds of ice she formed with Pack prove to be the warm thread that defies fate? [Written by MAL Rewrite]