When it comes to the fantasy MMORPG Cross Reverie, none can match the power of the Demon King Diablo. Possessing the game's rarest artifacts and an unrivaled player level, he overpowers all foolish enough to confront him. But despite his fearsome reputation, Diablo's true identity is Takuma Sakamoto, a shut-in gamer devoid of any social skills. Defeating hopeless challengers day by day, Takuma cares about nothing else but his virtual life—that is, until a summoning spell suddenly transports him to another world where he has Diablo's appearance! In this new world resembling his favorite game, Takuma is greeted by the two girls who summoned him: Rem Galeu, a petite Pantherian adventurer, and Shera L. Greenwood, a busty Elf summoner. They perform an Enslavement Ritual in an attempt to subjugate him, but the spell backfires and causes them to become his slaves instead. With the situation now becoming more awkward than ever, Takuma decides to accompany the girls in finding a way to unbind their contract while learning to adapt to his new existence as the menacing Demon King. [Written by MAL Rewrite]

The Otherworldly Demon King and the Summoner Girls' Slave Magic

How Not to Summon a Demon Lord Reviews

Regular high schooler Taichi Nishimura and his childhood friend, Rin Azuma, are on their way to school one ordinary morning. Suddenly, a glowing light envelops them, transporting them to a fantasy world full of magical creatures. Upon their arrival, Taichi and Rin are threatened by a beast. They are promptly saved by a group of adventurers, who advise the pair that traveling unarmed and inexperienced makes them vulnerable to the recently increasing monster attacks. Taichi and Rin are directed to the Guild, where they can determine their magical aptitude and register as adventurers. However, the test they take reveals an unprecedented result: Taichi and Rin possess extraordinary powers that far surpass the standard mage, instantly transforming them from typical high school students to the ultimate cheat magicians. Taichi and Rin learn to grasp the full extent of their powers and familiarize themselves with their new world. However, while the duo seeks to uncover the reason behind their transportation and a possible way back to their original world, unexpected trouble lurks in the shadows. [Written by MAL Rewrite] How Not to Summon a Demon Lord Ω

Aired with the rebroadcast of Isekai Cheat Magician. 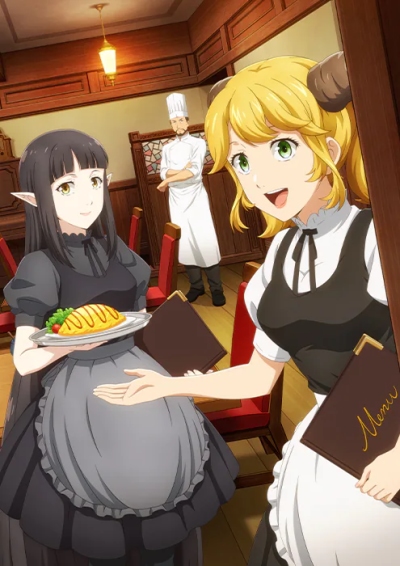 Restaurant to Another World

Western Restaurant Nekoya is a popular eatery located on a street corner in a Tokyo shopping district. Serving both traditional Japanese fare as well as Western dishes, this eating establishment is popular among Tokyo's residents. But this seemingly ordinary restaurant is also popular with another type of clientele... While the restaurant is thought to be closed on Saturdays, the truth is that on this special day each week, its doors are instead opened to the inhabitants of other worlds. From dragons and elves to fairies and mages, this restaurant has no shortage of strange customers. Nevertheless, the enigmatic chef known only as "Master" will be waiting to serve up their favorite dishes with a kind smile and keep them coming back for many more Saturdays to come. [Written by MAL Rewrite]

In Another World With My Smartphone

In a thoughtless blunder, God accidentally strikes down Touya Mochizuki with a stray bolt of lightning! As an apology, God offers him one wish and the chance to live again in a magical fantasy world. Touya happily accepts the offer and, for his one wish, asks only to keep his smartphone with him as he begins his journey into this mysterious world. Starting over in this new world, Touya finds it is filled with magic—which he has an affinity for—and cute girls vying for his attention. These girls—the twins Linze and Elze Silhoueska, Yumina Urnea Belfast, Leen, and Yae Kokonoe—provide Touya with no end of romantic frustrations, but also companionship as he discovers the secrets of this new world. [Written by MAL Rewrite]